Businesses are sometimes conjured right out of thin air; entrepreneurs see an opportunity, and they take it, or they come out of the mouths of twenty-three-year-old agricultural students, which was how the company Bigleaf Maple Syrup came to be.

Rick Hewson, CEO of the Hupacasath band in the Alberni Valley, was touring through one of the forests on the reserve with an agricultural student who was tagging along when the student noticed all the Bigleaf Maple trees around them and expressed the potential that the trees could have.

July or August is when the idea came about says Rick.

November of 2016 is when Rick, and other band members, decided to go ahead and found Bigleaf Maple Syrup.

Though, Big Leaf Maple Syrup is a newborn, taking its first steps in the world of business, Rick says “There is an extraordinary demand for our product.”

Why is the product so unique?

“It has a unique taste, definite maple taste, almost butterscotch.”

Due to being well advertised and promoted, there is already interest in their maple syrup overseas in countries like Korea, Germany, Japan, China. The United States has also expressed their interest in the new syrup making a name for itself.

The province of British Columbia owns a lot of the land with Bigleaf Maples, but luckily Hupacasath, one of three bands in the Alberni Valley area, was blessed with an abundance of Bigleaf Maples on their land. Just thirteen miles outside Port Alberni, is where the company is tapping their trees; it is a remote but still accessible location.

Now, just because Hupacasath has a substantial inventory of Big Leaf maple trees, doesn’t mean they have struck instant oil. There are many factors and curve balls they’ve dealt with along the way.

“You’ve got to have the right temperature, and the right sized trees.”

Before they could start the business, they toured some maple tree farms on Canada’s east coast. After telling the owners there briefly about their business venture, and that they are from Vancouver Island, the owners said: “You guys are crazy, no one taps maple syrup out on the west coast.”

Rick says that they have concluded their first year of business and “We’re now tapping a little over 600 trees, and our growth plan is to tap 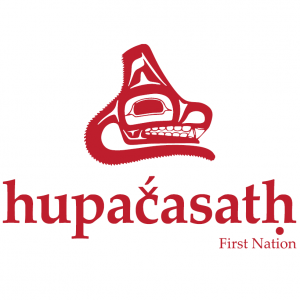 3000.” It is safe to say that is a rapidly expanding company.

Kleekhoot Gold is a great example of a company that respects the resource that produces their product. They are a local island company interested harvesting the fruit that nature provides, but at the same time preserving BC’s beautiful forests at the same time.

It is a source of revenue that does not involve cutting any Bigleaf Maples down for lumber.

Above all, when a young university student mentioned the Bigleaf Maples on a walk through of the land, it didn’t just give birth to a company; it created job opportunities in a local community.

The company has hired a full crew to keep up with the demand, and as they expand, they’ll look for more employees.

This is one of those cases where nature provided jobs; jobs that are environmentally friendly.