HomeBlogRuth Charleson adds lifetime of experience to the NEDC’s board

Ruth Charleson adds lifetime of experience to the NEDC’s board

Ruth Charleson may be the new kid on the block where NEDC’s board of directors is concerned, but at 67 with a lifetime of experience to draw on, she brings a lot to the table.
The NEDC board numbers 14 people — one representative each from each of the 14 Nuu-chah-nulth community’s located on the west side of Vancouver Island.
“I knew about them,” she says of NEDC, “but I was never really curious enough to approach them. I was working most of my life.”
Charleson says it all started a year ago February when she was elected to council of her native Hesquiaht band, located west of Tofino in the little community of Hot Springs Cove, “and then the Chief In Council sent me to represent the Hesquiaht people on the (NEDC) board.”
How she got to be here has been a long journey.
Charleson spent 11 years in residential school, and graduated from NDSS in Nanaimo. 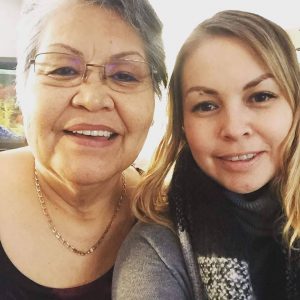 After she finished Gr. 12 she went straight in to nursing then did that for a couple years, “and discovered  it wasn’t really me.”

After that she says she did odd jobs like waitressing, working in a fish plant, “and oh yeah, I got paid for being in a movie,” she chuckled, referring to I Heard The Owl Call My Name.

The film, based on the best-selling 1960s book by Margaret Craven (which reached No. 1 on the New York Times best seller list), was shot on B.C.’s West Coast in 1972, and tells the story of a young Anglican named Mark Brian “who is sent as a vicar to a native American village in B.C., where he learns of faith and humanity.”
“They still show it on T.V. every Christmas season, and every year people stop me and say, ‘I just saw you in that movie. ‘
I was young, It was very exciting.”
From there she went on to take numerous other college courses including accounting, home care, and secretarial.
At one point she spent six years working in a shelter home while continuing to take college courses.
Through it all, her family has remained close — she has three daughters and four grandchildren.
Her role on the NEDC board is to attend meetings, review and vote on applications for business loans, “and to educate the communities.
“I enjoy it,” she says. “It’s a very organized board. There’s a lot of knowledge and skill around the table. Me being the newest, I’m always asking questions.”
“Yes it has,” she answered quickly when asked if she’s been surprised at what she’s been exposed to through NEDC. “I didn’t even realize that our people from the communities have these functional businesses. It never occurred to me that people were doing that. I guess because I was always away from the community that I didn’t see it.
“I find it very exciting. I really enjoy hearing the stories (of the applicants). I’m very proud of the people who are making these business plans, and succeeding. It takes a lot of skill and knowledge, and a lot of willingness to put themselves out there because this world is not really inclusive of first nations businesses… not yet anyway.
“It’s quite amazing that they’re willing to challenge society and put themselves out there to succeed.”
Charleson also spent 17 years doing child protection social work as a delegated aboriginal agent for the Government of BC. A job that took her all over the Lower Mainland and Vancouver Island.
“I saw was the bad things,” she says, “so this has been really good for my soul to see all this.
“It fills my heart with pride and hope for our people that we can do things, even though we’re still living in a repressive world.”
Share
0
X
X
X