Patrick Charleson is humbled at winning an award for Outstanding Business Achievement through the Nuu-chah-nulth Economic Development Corporation, NEDC, small business awards.
“It’s quite humbling, I was surprised,” says the long-time owner of Taa-Wa Fish Company Ltd and a Hesquiaht elder..  “I never thought I’d win anything in my life. This is the first time I’ve won anything at all. I feel really good about it.”
Charleson started fishing with his father 80 years ago when he was six. He incorporated the company in 1978 and fished for sockeye, pinks, spring, salmon, chum and coho.
He had two boats, a 44 foot trawler and a 62 ft. seiner.
He had also built his own boat at age 19, the 42 ft. trawler Eileen C, named after his late daughter. 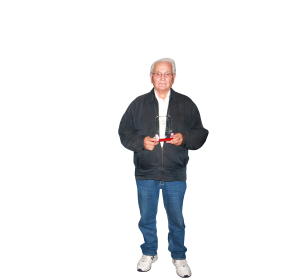 “I built it with no power tools at all,” he says. “It took me 2 ½ years. I just worked at it in the winter.”
Charleson, age 86 and now retired, says he would fish with his three sons and cover a large area.
“We fish all over the B.C. coast, inside and out, Johnstone Strait, Prince Rupert.”

They would start with sockeye in June and fish until late August with pinks included. The salmon season now ends in mid-November with the chum.
Charleson’s two sons and three grandsons now run the boats as his son Frenchie passed away.
“My son Dave ran it for six years and for the last three, four years my son Connie has been running the boats and has been doing fairly well,” says Charleson.
“He had a good season thanks to the big run of chum, biggest yet, never had chum come in like that when I ran the boats.”
Charleson says the prices have changed dramatically over the years. He got eight cents a pound for salmon in the 1970s and the prices are now $1.25 a pound.
He credits his sons and grandsons for working hard at running the business and upholding the company’s reputation.
“I’m really proud of my sons and grandson,” says Charleson. “They are doing a good job.”