The House of Hitwitsa: Storytelling

When a business is just meant to be, and the universe has it laid out for a person, sometimes it all starts with a vision; a vision encouraged by the universe of course. That was literally the case for Lewis and Cathy George owners of The House of Himwitsa in Tofino. Cathy and Lewis George are originally from  Ahousaht.

“Going back a few years, my wife was working for Roy Henry Vickers, and before she went to work for Roy Henry, she had a vision to open 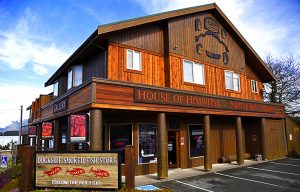 The House of Himwitsa is a lodge, art gallery, and restaurant. Although Cathy and Lewis have decided with all the eateries in Tofino, 31 to be exact, it’s time to close down the restaurant of twenty-two years and expand their lodge and gallery. Their goal is to turn the restaurant into a two bedroom extension of the lodge.

The two have brought on an architect on board for the renovation, but construction won’t start until winter because they do not want to disturb the experience of their current summer customers.

“We had a house here, and it was across from the old Co-op. We asked a contractor to come give us a quote to come turn our house into a gallery. It was 50,000 dollars, and we didn’t have that. So, we just kind of put that on the backburner, and she was working for Roy Henry. there would always be a tourist that would come in and say isn’t there other first nations in this area do artwork? The tourist were just really striving to look for other work.”

The gallery where they are located at now first came to be in 1994. Lewis says that the whole backbone this has been his wife, Cathy.

“She is the one that makes it tick. She has a really good eye for first nations artwork that she buys.”

Their first mortgage was through a larger financial institution and their second was through the NEDC. They were told that if it didn’t work the bank was going to come for their house, their car, their boat; in other words, everything that they owned at the time.

“To think about that, making this whole business plan work and being entrepreneurs, but also being first nations. Being first nations is as difficult as it is. We had a lot of people saying that oh yeah, well you got money from the government. We got zero from the government to do this; we did this all on our own. The money we borrowed we paid back.”

This successful lodge/gallery did not come easy.

“If we could go back and start all over again, I would definitely have a project manager. We couldn’t afford a project manager when we were building. After all is said and done, it is worth it to have somebody that knows what they’re doing. To keep an eye on cost, to keep an eye on contractors that will take you for a total ride if you’re not watching them closely. We had so many tools that were bought, and we don’t have those tools today; they walked off the job.”

In fact, it came only after much trial and error.

House of Himwitsa’s roof had to be replaced, and when the decks were built, they were sloped the wrong way. Wrap around decks should be sloped away from the structure so that water runs away from the house and not into it, so all five decks had to be redone.

What keeps the customers coming back to the gallery and the lodge?

House of Himwitsa gallery is able to keep the prices at a reasonable rate, but not necessarily meaning they’re just giving the artwork away for free. They have masks that they sell for 10,000-15,000 dollars.

What brings the customers back into the lodge is that there are very few places in Tofino where someone is going to have waterfront access, and he or she gets that with the House of Himwitsa.

“There are whales that swim and come right in front of our building, Gray Whales and Killer Whales, and our guests have witnessed that.” 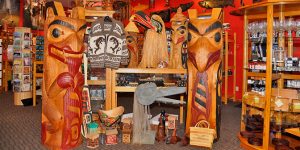 Lewis said that the harbor with activity with the sea life, boats coming and planes going their customers get to experience a living harbor.

When guests leave the House of Himwitsa, Cathy and Lewis like the satisfaction of knowing that their guests are leaving with the sense of they were looked after well.

Cathy and Lewis treat their employees the same way, and they don’t ask them to do anything that they wouldn’t do. Yes, even the owners share the responsibilities of chambermaiding and the janitorial duties with the rest of the staff. Their core values are honesty and integrity, and they do their best to live by those principles.

If a person finds themselves in need of a story to tell, come see Cathy and Lewis in Tofino.

For more information visit them online at http://www.himwitsa.com/