The 10th annual NEDC Business Awards are in the books, and judging by the finalists, the future of first nations’ business looks to be in good hands.
The 2016 Nuu-chah-nulth Economic Development Business Awards were held Nov. 4-5 at Parksville’s Tigh-Na-Mara Resort in conjunction with a two-day business conference, also hosted by NEDC.
NEDC chairperson Charlie Cootes oversaw the awards banquet and put the spotlight on the six award-winners. The evening gala also included a performance by the Le-la-la dance troupe.
Contacted at his office, NEDC chairperson Charlie Cootes said it’s always great “to see big successes in our aboriginal community working through NEDC.
“Once a year we get to recognize the best in emerging businesses in different categories, and it’s always such a pleasure to meet the principals and look at the businesses they’re creating.”
As for the future of NEDC, Cootes said “I can tell you that out of all the aboriginal capital corporations in Canada, NEDC ranks either at the top, or top two, with how they do business and how they conduct their affairs.
“I think there is a continuing future for our business awards,” he said, “and hopefully it will get bigger. It’s a very popular event, and very 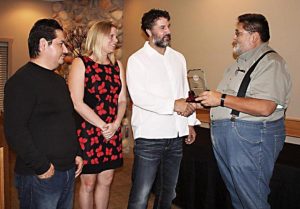 rewarding for not only the recipients, but for the people who are involved in providing the awards.”
Established in 1984 (the late George Watts had the original vision, and was instrumental in the establishment of NEDC), NEDC’s mission is “to continue to develop and grow to be the best Aboriginal Corporation dealing with financial, banking and business development services.”
Asked for some insight into NEDC’s contributions, General Manager Al Little said “it would be in the thousands the number of businesses that have been assisted. Dollar wise I know conservatively it’s well over $300 million in total, and that was a while ago. Annually we do about $5-10 million in financing a year.”
And like so many of his peers at NEDC, Little says he likes what he sees, and that the entrepreneurial spirit is alive and well.
“You just never know what sort of business idea is going to come through the door,” he said, adding that from their end, the NEDC remains receptive to looking at assisting any business.
“Obviously the business has to make sense and be viable, but if it is, then really beyond that there are no restrictions, so we do get quite a diverse (cross-section) of businesses, which is good for us overall because we’re not pinned into the fishing industry or forest industry or anything like that,” he said, pointing out “our focus is on the viability of the business, not on the type of business.”
Share
0
X
X
X